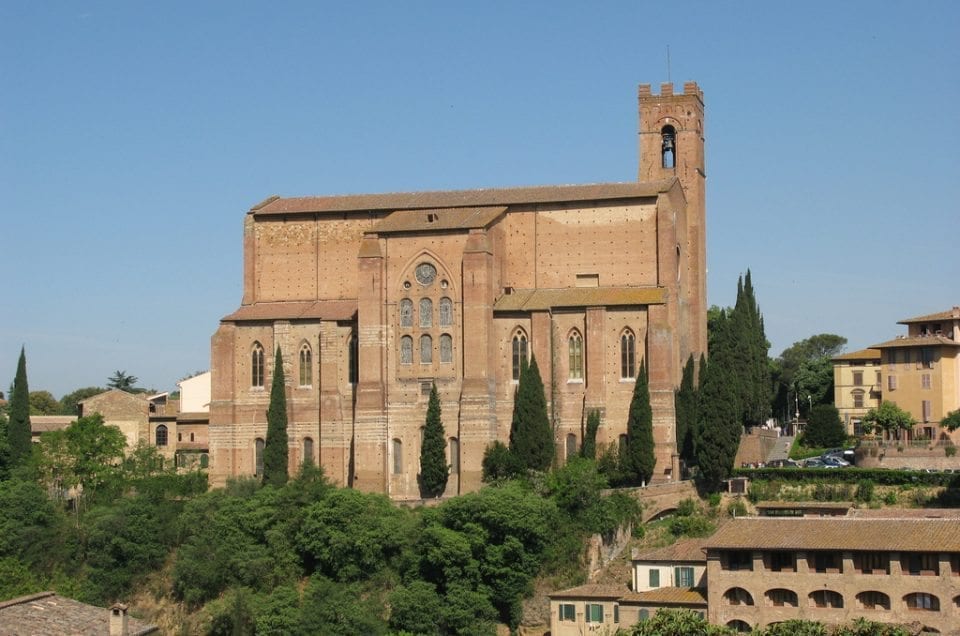 Until 1460, the area around the church of San Francesco was outside the city’s walls. Then Pope Pius II, whose parents were buried in the church, insisted that San Francesco be included inside the defensive walls that we see today.

The church was begun in 1326 and finished in 1475. Although the façade is in neo-Gothic style, it is a modern work completed in 1913.
Inside, there is a single grandiose Gothic nave distinguished by the walls banded in black and white marble.
The left transept has chapels containing frescoes by the brothers, Pietro and Ambrogio Lorenzetti.
Pietro’s Crucifixion in the first chapel is a very powerful work expressing the high tragedy of Christ on the Cross.
In the third chapel, Ambrogio painted Saint Louis of Toulouse kneeling before Pope Boniface VIII, and the Martyrdom of the Franciscan Friars in Ceuta, Morocco. These works by the Lorenzetti brothers are dated between 1331 and 1335.
Inside a modern chapel of the church, you can find the Eucharistic Miracle of Sienna. Here two hundred consecrated hosts are conserved. They had been stolen from the church in 1730 and later found in the church of Santa Maria di Provenzano. Solemnly carried back to San Francesco, they have remained fresh and intact ever since and can be revered in a modern and richly decorated monstrance.

After you leave the church, on the right-hand side you will see the Oratory of San Bernardino, which is dedicated to the other great saint of Sienna, St Bernardino, who lived between 1380 and 1444. Even though he was born in Massa Marittima, he is always referred to as San Bernardino from Sienna. The city was in fact not only where his family came from, but also where he worked so tirelessly for the reform of the Franciscan order and as a mediator between the different polictical factions fighting for power in the city. The Oratory has an upper and a lower part.
The upper oratory is especially interesting on account of its ceiling encased in an extremely elegant design of wood and stucco, finished in 1496. The walls are decorated with 16th century paintings, the most notable of which are by Sodoma and Beccafumi.

From Piazza San Francesco, at the beginning of Via dei Rossi, take Via dei Baroncelli and Via del Fosso to reach Santa Maria di Provenzano