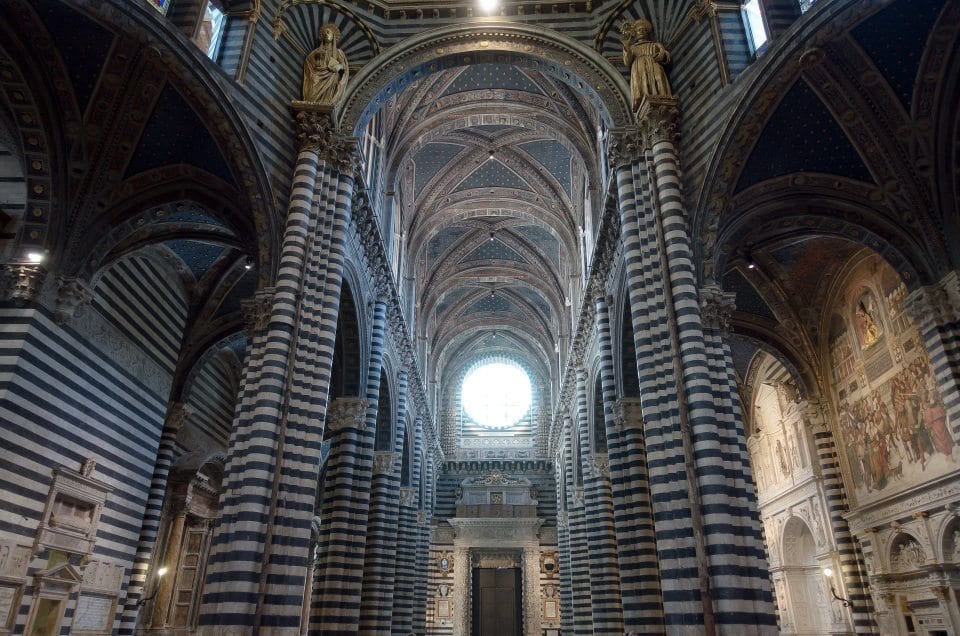 The interior of the cathedral is stunning. The banded two-tone arches with their full round curves follow one another in harmonious lines and they provide a perfect backdrop to the works of rare beauty which decorate the building.

The pavement which is covered with images is an exceptional piece of work, even for Italy; it was begun in 1372 and finished in 1562. which is covered with images is an exceptional piece of work, even for Italy; it was begun in 1372 and finished in 1562. Although, unfortunately, only part of it can be seen, the inlay work and marble images are of the utmost interest. Among these should be mentioned the designs of the great Sienese mannerist, Domenico Beccafumi, made between 1522 and 1525.
If you go into the transept at the end of the right-hand nave, you’ll find the beautiful baroque Chapel of the Madonna del Voto. Constructed in 1661 on the orders of the Sienese pope, Alexander VII, of the noble Chigi family, it was designed by the famous sculptor and architect Gian Lorenzo Bernini with his usual scenographic effects. The statues of San Girolamo and Mary Magdalen were sculpted by Bernini himself.
The high altar of the sanctuary was designed by the Sienese artist Baldassarre Peruzzi and it contains a splendid bronze canopy made between 1467 and 1472 by the Sienese artist Lorenzo di Pietro, known as il Vecchietta. It was originally cast for the high altar of the church in the Hospital of Santa Maria della Scala but, on account of its beauty, it was transferred here in 1506 in exaltation of the Holy Eucharist.
In the apse there is a very ornate wooden choir, begun in 1362 but not finished until between 1567 and 1570 when the central stalls were added.But the jewel of this part of the cathedral is the large stained glass window, the work of the celebrated Duccio di Boninsegna, founder of the Sienese school, who portrayed here the death, assumption and coronation of Our Lady, the four evangelists and the saintly patrons of Sienna. Dating back to 1288, this is a high point of artistic truth, one of the greatest expressions of Italian Gothic glasswork.
As you walk beneath the hexagon of the dome you will see the exquisite gothic pulpi sculpted in marblebetween 1266 and 1268 by Nicola Pisano, helped by his son Giovanni and by Arnolfo di Cambio. The work’s splendour lies in its harmony, the richness of the figures and the remarkable reality of the stories, placing it among the masterpieces of Italian medieval sculpture.
Going down the left-hand side of the transept you will find the chapel of San Giovanni Battista with the bronze statue of the saint made in 1457 by the great Florentine Renaissance sculptor Donatello.
The Libreria Piccolomini, with its elaborate marble façade, opens off the left-hand nave. It was built in 1495 by Cardinal Francesco Todeschini Piccolomini, of Sienna, in order to house the library of his uncle, Pope Pius II, who was born Aeneas Silvio Piccolomini. The cardinal, who had inherited the books and wished to donate them to the Cathedral of Sienna, was to become Pope Pius III in 1503 but his reign lasted only 26 days. The chapel contains some much admired frescoes by Bernardino Pinturicchio.
Bernardino di Betto, who was nicknamed il Pinturicchio on account of his small stature was, along with the more famous Pietro Perugino, the head of the Umbrian school of Renaissance painting. Pinturicchio’s frescoes beautifully decorate the Libreria and they narrate the principal events in the earthly life of Aeneas Silvio Piccolomini who was not only pope but a humanist and diplomat. Accordingly, the refinement of the room underlines its profoundly humanistic, almost classical spirit which is confirmed by the marble group in the center of the room, the three Graces. This is a Roman copy of a Greek original, possibly a picture, which dates back to the 3rd century AD.This truly wonderful room impresses us with the power of the Piccolomini family, their abiding interest in culture and love for their native city of Sienna.
As you leave, you see the elegant but solemn Piccolomini altar which was made on the orders of Pope Pius III when he was still a cardinal. It is truly imposing with its numerous orders and statues, four of which were sculpted by Michelangelo between 1501 and 1504; these are, on the left, St Gregory and St Paul and, on the right, St Peter and St Pius.
Some underground sections of the cathedral have recently been opened to the public and they document the problems encountered during the construction of this remarkable, complex structure. You can see a number of 13th century frescoes, some of which were probably done by the great Duccio di Boninsegna.
The rooms include what was was probably a small arcade and are very impressive, not only because of the architectonic elements and the traces of painting that remain, but also on account of the tangible evidence they give of Sienna’s Christian faith, with the written invocations and traces of candles and lamps they left behind.