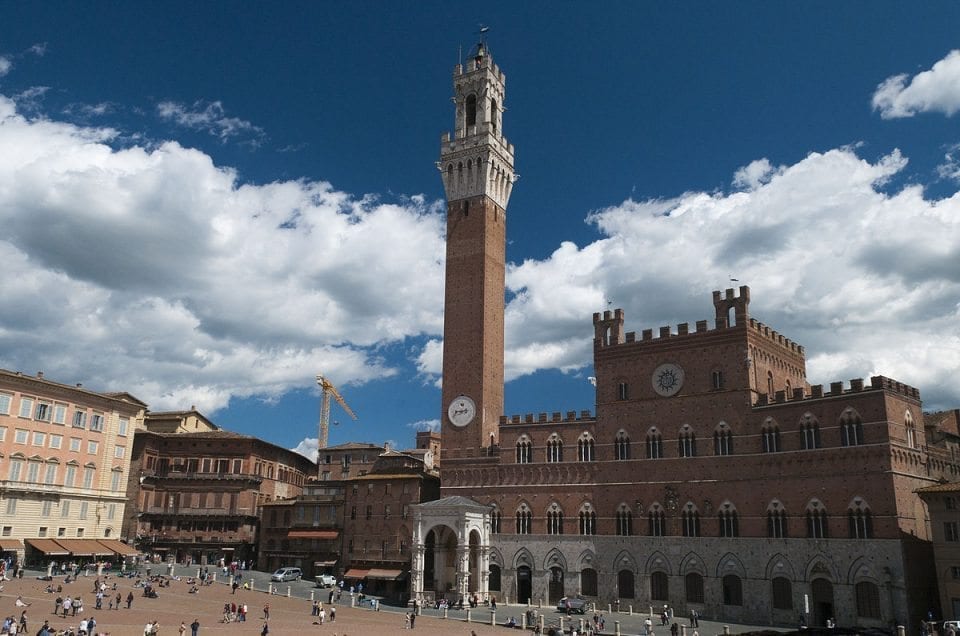 This building is the Town Hall of Sienna and provides a symbol of the city’s freedom. Its construction in the Gothic style began in 1288 and continued until 1310.
Additions were made during the 14th century, but the most important occurred in the 17th century when the side wings were raised to meet the central section. Fulfilling a need to blend in with the ambience and to achieve coherence in style, these extensions were built in what could be termed early neo-Gothic.

The exterior partly follows the curve of the piazza itself and is distinguished by its bichromatic red and white, the result of building partly in red brick and partly in travertine, a whitish stone. The great marble coat of arms of the Medici family stands out in the middle of the façade. It was placed here after 1557, when Cosimo de’ Medici added the state of Sienna to his dominions. Though at the time he was the Duke of Florence, he later became the first Grand Duke of Tuscany in 1569.

The interior of the Palazzo Pubblico is an excellent example of a medieval public building that was designed to exalt the power of the Republic of Sienna. Today, its many splendid rooms accommodate the city’s Civic Museum.
An absolute must is the Sala del Mappamondo which holds the wonderful fresco painted in 1325 by Simone Martini. Known as the Maestà, it shows the Madonna with Child enthroned in majesty and surrounded by the angels and saints, including the patron saints of Sienna. There is another fresco, also by Simone Martini and dated 1329, which portrays the triumphant soldier of fortune, Guidoriccio da Fogliano, after he had taken the castle of Montemassi by storm.
From the Sala del Mappamondo you move into the Sala della Pace which is perhaps the most famous in the whole Palazzo. Here the frescoes depict allegories of Good and Bad Government that were painted by the Sienese painter Ambrogio Lorenzetti between 1337 and 1339. In the picture showing Good Government, you can see a splendid view of Sienna as it was at that time. The nearby countryside outside the town is also painted, making this one of the very first Italian landscape paintings.
The chapel is also interesting, for this is where the civil authorities attended Mass. It is decorated with frescoes going back to the early 15th century by the Sienese artist Taddeo di Bartoli. Most important is the magnificent wooden choir, with its exceptional sculptures and inlay work done by Domenico di Niccolò, also from Sienna, who later came to be known as Niccolò dei Cori because he was responsible for a number of similar choirs. In the inlays, you can see subjects explaining articles in the Catholic profession of faith, the Creed. This extraordinary work was completed between 1415 and 1422.
Another room to visit in the Museum is the Sala dei Priori, also known as the Sala di Balìa. Named after the supreme magistracy of the city-state of Sienna, this room was completely covered in frescoes in 1407 by Spinello, the painter from Arezzo, who was helped by his son, Parri. These frescoes are among the greatest of the mature Gothic age in Tuscany and they recount episodes in the life of Pope Alexander III, originally Rolando Bandinelli from Sienna. He was a strong defender of the church and clashed with Frederick I, the Holy Roman Emperor known everywhere as Barbarossa.