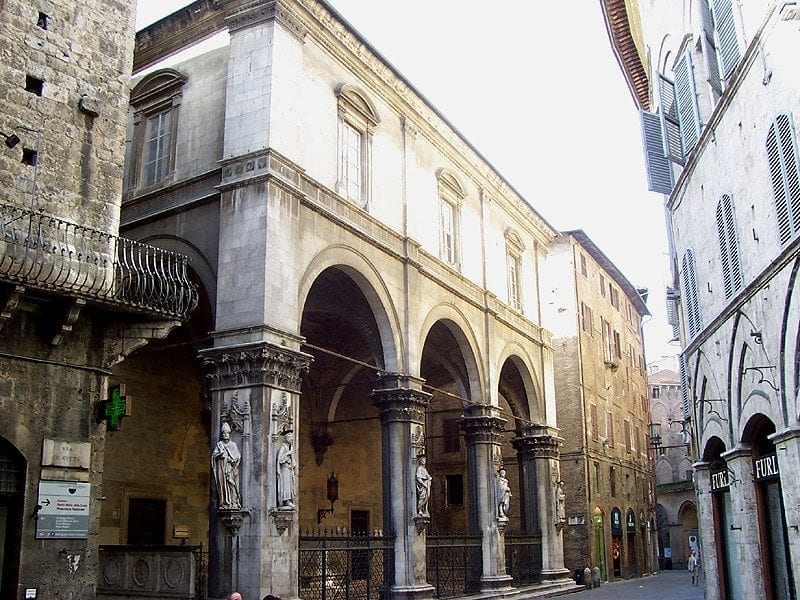 From Piazza Tolomei, go to the intersection of the street named Banchi di Sopra and Via di Città. In the Middle Ages, this was called the “Croce del Travaglio”, or the crossroad of labor, because it used to be blocked with stanchions and chains.

It was the meeting point for the three principal roads linking the different districts of Sienna. The Banchi di sopra headed towards Florence, the Via di Città went to Massa Marittima, Grosseto and the Maremma, Banchi di sotto and Via di Pantaneto went to Rome, while Via dei Pispini branched off to Arezzo.
The Loggia di Mercanzia faces onto the croce del travaglio intersection.

This simple but majestic Loggia was constructed in the 15th century and you can see statues of the saints in the pillars.It is called Mercanzia because it used to house the Consoli della Mercanzia, who were the magistrates regulating the city’s merchants and their traffic.
The upper part is an 18th century addition designed by the famous Florentine architect Ferdinando Fuga, whose main work can be found in Rome and Naples.
From the intersection, take Banchi di Sotto which opens into Chiasso Largo where the Palazzo Piccolomini stands.