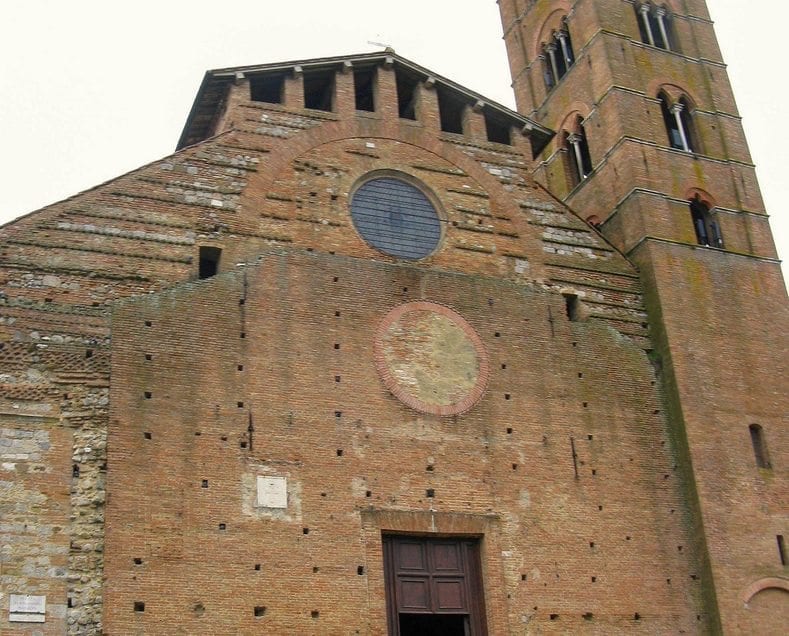 Though the original church of Santa Maria dei Servi goes back to the end of the 13th century, it was enlarged in the following century, and then radically reconstructed between 1471 and 1528 to include three naves, in accordance with the Renaissance canon.

Signs of these changes can still be seen on the plain façade.
Next to this, there is a lovely 13th century bell tower, which was extensively rebuilt in 1926.
The interior, based on a Latin cross, is majestic and impressive.
On the second altar of the right-hand nave, there is a wonderful Madonna with Child, known as the Madonna del Bordone. This work was produced in 1261 by the Florentine painter, Coppo Marcovaldo, when he was prisoner in Sienna after the battle of Monteaperti. The picture was retouched in the 14th century by a pupil of Duccio da Boninsegna.
At the third altar on the right side, you can see a beautiful Nativity of the Madonna painted by the baroque Sienese artist Rutilio Manetti and, at the fifth altar, a tragic interpretation of the Massacre of the Innocents by the 15th century painter Matteo di Giovanni.
Another Massacre of the Innocents is to be found in the second chapel of the right-hand transept, this time a 14th century fresco by Pietro Lorenzetti. Other frescoes by Pietro may be seen on the walls of the second chapel in the left transept, while in the chapel at the end, there is a beautiful portrait of the Madonna del Manto painted in 1436 by Giovanni di Paolo.